The street named after a famous commander who lived there. The street has many outstanding buildings that are closely linked to the history of Kherson. There are also shops and entertainment venues. Suvorov Street today is a traffic free zone.

Suvorov Street hasn’t always had that name. In the 30’s of the 19th century one of its parts was called Holly Virgin, and the other was called Catholic (because a Catholic church was located here). In 1927 it got a new name The 1st of May Street. And finally today it is named after a prominent person.
The style of the buildings in this street is quite diverse. For instance house №37 is a lavishly decorated, curved building, built in eclectic style. Earlier it was a place where the first credit institution of Kherson – mutual loan society – was located. House №28 built in the style of romantic modernism. House №6, which previously belonged to the family of landowners Marchenko, was built in Tatar style.

The history of the Roman Catholic church goes back to the times when the city was established. The Church of the Sacred Heart of Jesus which faces Suvorov Street (Staroobryadska St., 37) has been built on the orders of prince Potemkin to attract the attention of foreigners to the city. The first church was made of clay, but later the stone church was build. In Soviet times it was closed. A cinema for children worked here. It has been rebuilt and now it is a functional Roman Catholic church.
Buildings of this street convey Kherson history. For example, there is still house №1a where future generalissimo Suvorov lived in 1792-1794. This was a hotel for visiting generals.

Besides noteworthy buildings there are also fountains, flower beds, lights and trees in this street. Until recently there was a tree near the house №4. According to the legends, Suvorov’s son Arkadiy nurse planted a small elm that later became the street beautification. However, life of trees, like life of people, always comes to an end. Still the memory of the tree remains to this day in the sculpture carved from the trunk of an elm. 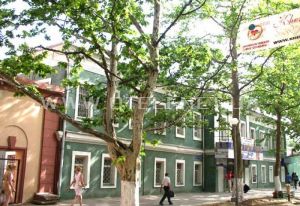 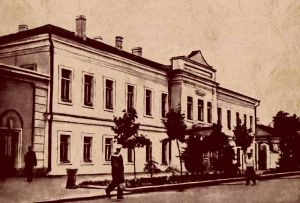